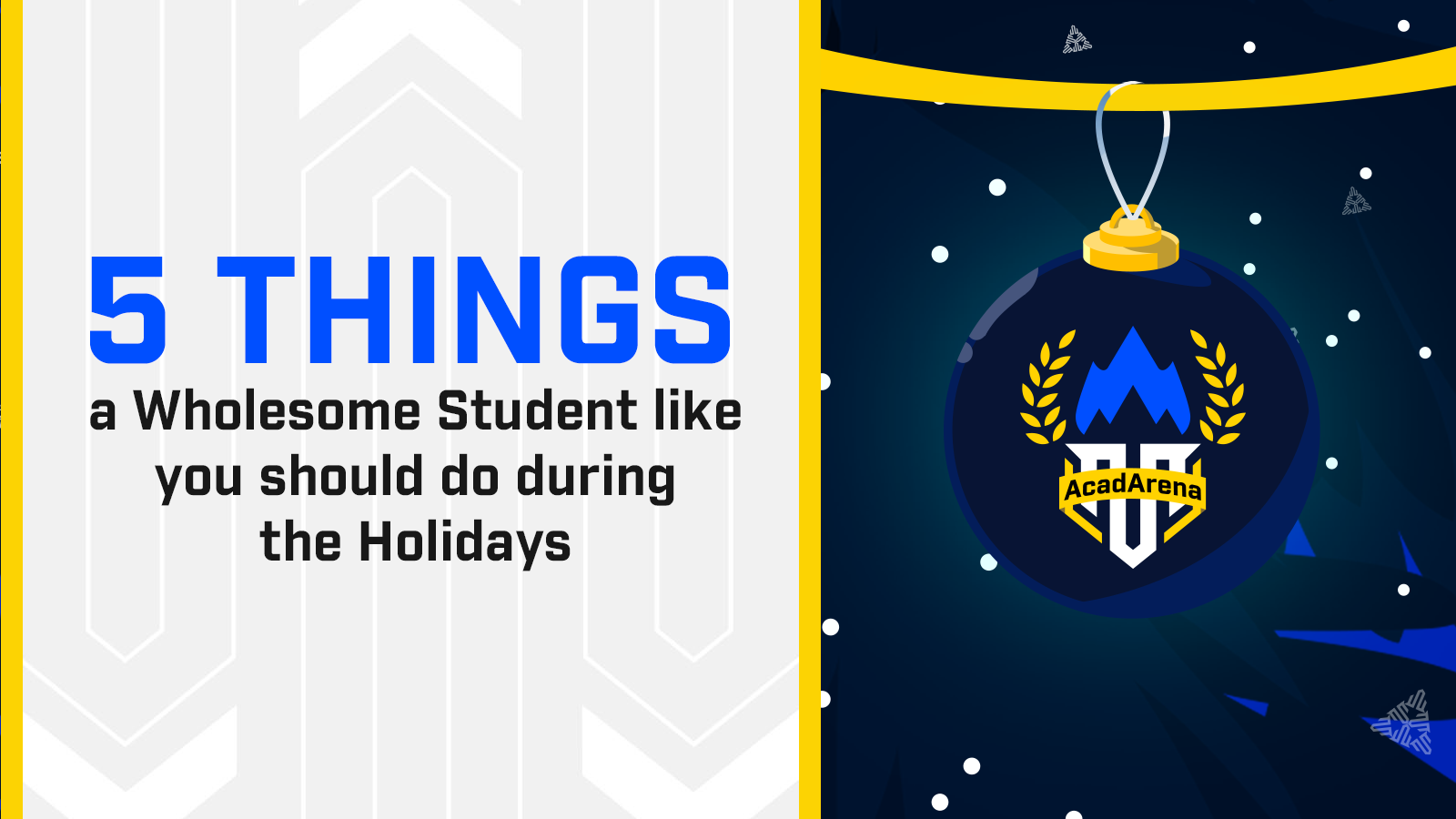 Congratulations, you survived the first semester. You might have a bunch of module activities due early next year (cough, UP, cough) but put your worries aside for now. Go take a break, you deserve it.

That said, you might find yourself unable to decide on what to do with all your free time. Oh, the tragedy of choice! It’s a good thing we at AcadArena compiled a handy list of wholesome activities you might enjoy this holiday season:

Watch a TV series with your family

Nothing says family bonding better than some good ol’ Netflix and Chill minus the Chill part. With an abundance of shows of all genres at your fingertips, why not try a title that could bridge the generation gap between you and your folks?

The final season of Attack on Titan is airing right now and what better way to introduce your family to anime than by witnessing Eren and the Scout Regiment learn what it means to be truly free?

There’s a good chance your Netflix exploits led you to The Queen’s Gambit and reawakened the twelve-year-old chess prodigy within you. It’s never too late to flex your now-smooth thinking organ again as there’s plenty of online learning resources that range from the basics of chess to the intricacies of opening gambits.

Or perhaps you stumbled upon an old Rubik’s cube during one of your Sunday cleaning sessions?  A couple of weeks is more than enough for you to learn how to solve a cube in less than 30 seconds with a blindfold on.

Kidding aside, keep in mind that these hobbies have no deadlines so there’s no reason to rush yourself. Take it easy for a change.

I’m sorry to be the bearer of bad news, but two weeks of holiday grinding isn’t going to get you out of Silver III. Save yourself some brain cells and play a non-competitive game instead.

There’s this new sci-fi RPG by the name of Haven where you play as a pair of lovers making their way around an abandoned alien planet. It’s a pretty chill game that even allows co-op play with your significant other. You gotta find an SO first, though.

Learn to cook something new

You’re going to have to stop relying on FoodPanda at some point in your life and no, knowing how to cook rice with a rice cooker isn’t enough. I’m being a hypocrite by preaching about this when I hardly cook myself but there’s no harm in learning the whole adulting thing sooner rather than later.

Is hoping for the return of face-to-face classes next year too tall an order? Because I can’t wait to cook something other than instant ramen in my apartment when things go back to normal.

A diligent student like you must have a huge pile of unread manga chapters stocked up because you prioritized your studies over your favorite harem series. With all the spare time you have now, however, it looks like you’ll breeze through all of them in a few days.

If you haven’t read it yet, Chainsaw Man’s “Public Safety Arc” was finished just last week and has proved to be nothing short of an insane ride. It’s even getting an anime adaptation courtesy of studio MAPPA (Jujutsu Kaisen, Dorohedoro, Attack on Titan Final Season).

On a more wholesome note, Take off your mask, Ishikawa is a new manga bound to make your heart go doki doki, to say the least. Only one chapter is out at the moment but boy do I have high hopes for it.