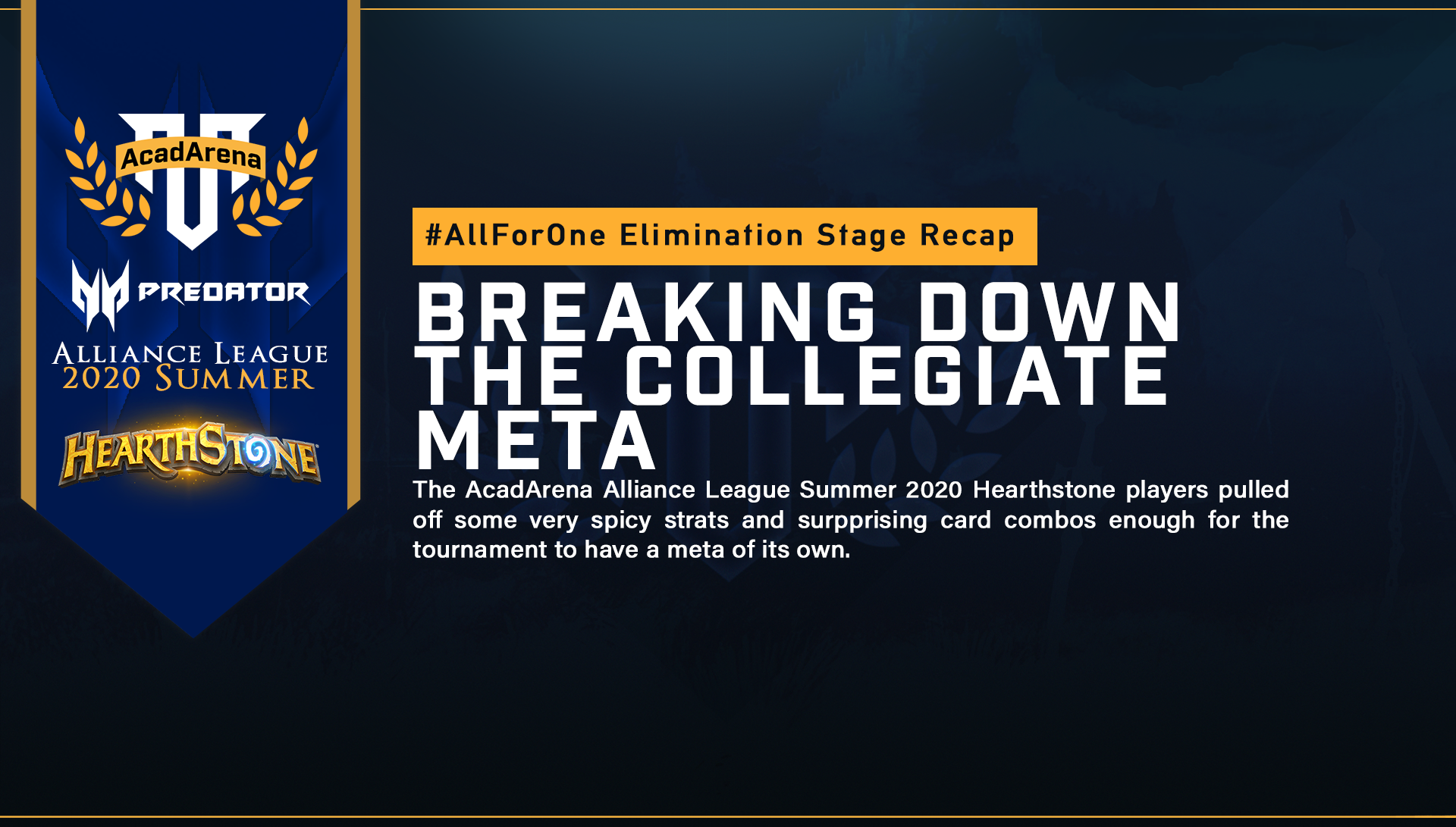 Esports AcadArena Alliance League: Hearthstone taking place during the tail end of Ashes of Outland and the introduction of Scholomance Academy presented players with the challenge of quickly adjusting to a brand new meta. For the most part, the tournament so far is a microcosm of the competitive scene in higher levels of play.

Ashes of Outland was a fast-paced expansion that saw Aggro Demon Hunter, Murloc Paladin, and Highlander Hunter dominate the meta. These three classes had the highest bring rate among Alliance League players with their natural predator, Warrior, being the most banned.

Scholomance Academy, on the other hand, is on track to being the most balanced meta Hearthstone has had in years and it is evident in the diverse class bring rates seen Gameweek 4 onwards.

The drastic change in prevailing class archetypes is also a breath of fresh air.

The value play-centered Galakrond package has been a loyal servant of Rogue for a long time but the sheer potential for game-winning card generation from Secret Passage prompted the class to switch to a hyper-aggressive strategy that utilizes weapons and stealthed minions.

Demon Hunter is no longer the SMORc machine it once was. While the Aggro Demon Hunter of old uses its weapons to clear enemy minions to keep its own minions alive, the introduction of dual-class Soul Fragment cards gives Demon Hunter more flexibility and the ability to go face for insane amounts of damage while clearing enemy boards at the same time.

The rapidly-evolving meta has taken a toll on reactive gameplay and has forced control classes such as Priest to take out a few board clears in exchange for their own sources of aggression.

A statistic that may turn some heads is the classes with the highest win rate: Mage and Warlock. While this may be attributed to the incredibly small sample size at our disposal, Demon Hunter interestingly saw a fair amount of play and wound up at the bottom of the win percentage table with an abysmal 33 percent.

One thing that does set the Alliance League apart from other tournaments is that student players operate with a student budget, which means they won’t be able to craft cards and experiment with decks as they please.

This has led to players tweaking the decks they played in the last expansion with the hopes of making them strong enough to at least put up a fight against the newer archetypes.

Sometimes this sort of creativity is rewarded with an unlikely win, sometimes it just leads to one-sided stomps that can’t be helped. Regardless, the final four players in the competition have proven time and again that they are capable of bringing the best out of their respective card collections and we’re confident they have quality Hearthstone matches in store for all of us.

Catch the Semi-Finals for the Predator AcadArena Alliance League Summer 2020 Hearhtstone this Sunday, September 13, 2020 only at twitch.tv/acadarenaph