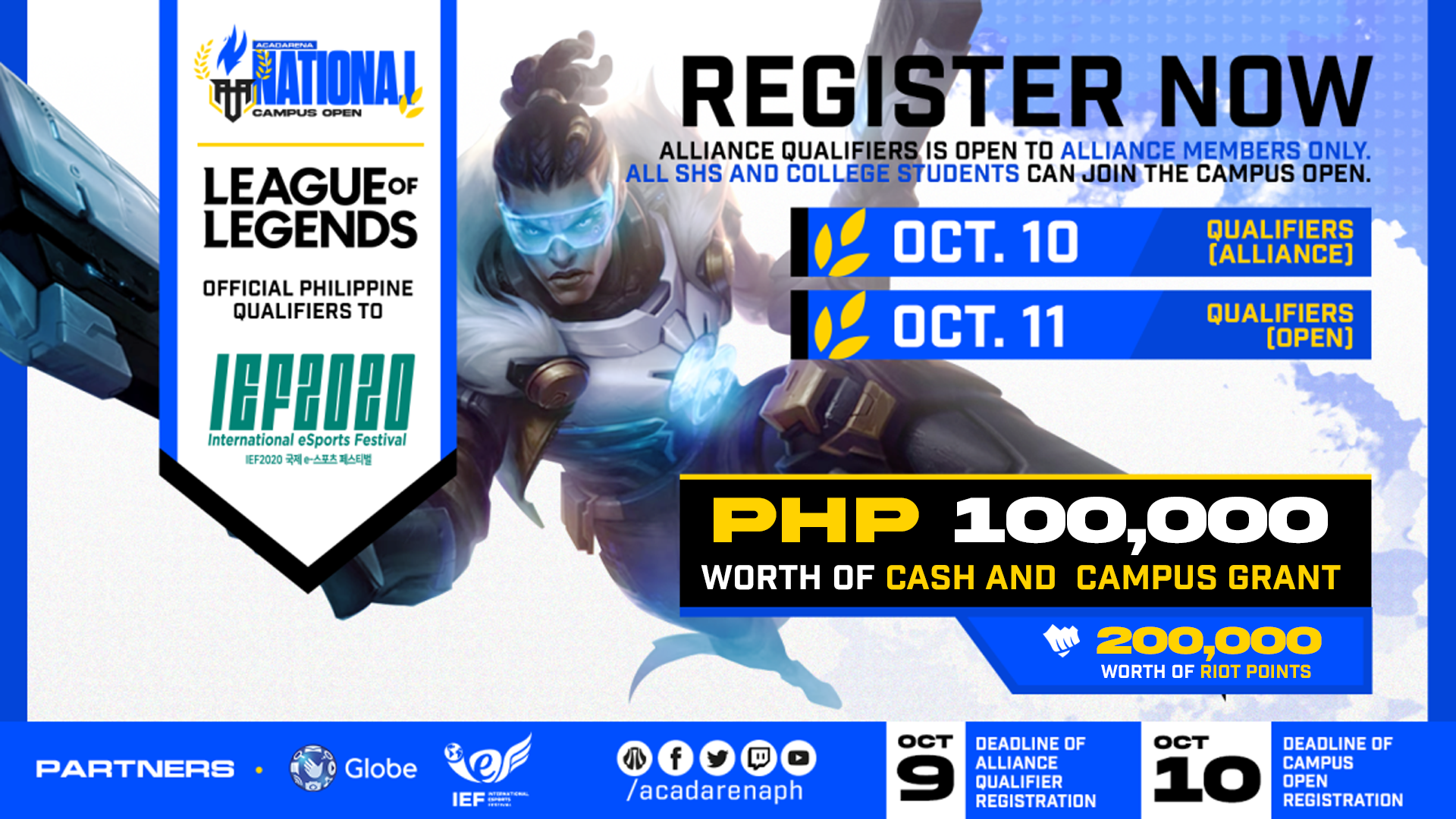 This article has recently been updated to reflect the ineligibility of senior high school students for the tournament. All matches will be held online.

The Esports AcadArena National Campus Open for League of Legends will have 16 campus teams vying for a shot at local and international glory. Qualifiers for the 100,000 RP prize pool tournament will begin on October 10.

The tournament will also serve as the official qualifier for the International e-Culture Festival 2020, which will be held in Gangnam, Korea on November 28-29.

Only college, masters, post-graduate or doctoral students are eligible. Students must submit IDs or proof of enrollment. Fresh graduates however, are not eligible.

You can check out the rule book here for more information.

Registrations for Alliance and Campus Open Qualifiers close at 8:00PM, Oct 9 and 10 respectively.

Registration forms are available below.

Official AcadArena Alliance member organizations get to enjoy a bonus qualifier date on October 10 but will only get to send a maximum of two teams. For the Open Qualifier, there will be no limit of teams each campus can send to represent.

The Alliance qualifier will have 12 slots to the National Cup. For a second chance, the teams must register in the Open Qualifiers. If you’re part of any campus with an Alliance member org, you can contact them to participate.

There will only be one Open Qualifier and it will have 4 slots available. The tournament format will be single elimination.

The 16 teams that make it out of the qualifiers will be divided into four groups of four playing a single round robin format. Only the top team from each group will advance to the B03 semifinals. The finals will be played as a B05.

All the matches will be played online.

Represents the Philippines in International e-Culture Festival 2020 in Gangnam, Korea

Prize pool to be determined.

The IEF is organized by the International Exchange Foundation under the official sponsorship of the governments of China and Korea with the aim of establishing friendly cooperative relationships between the youth.

Teams that have represented the country in the IEF are Oblation Esports of the University of the Philippines Diliman in 2016 and 2017 and the  University of Santo Tomas Teletigers in 2018 and 2019.

For more information, inquiries or clarifications you can send us a message at the official AcadArena FB page here.