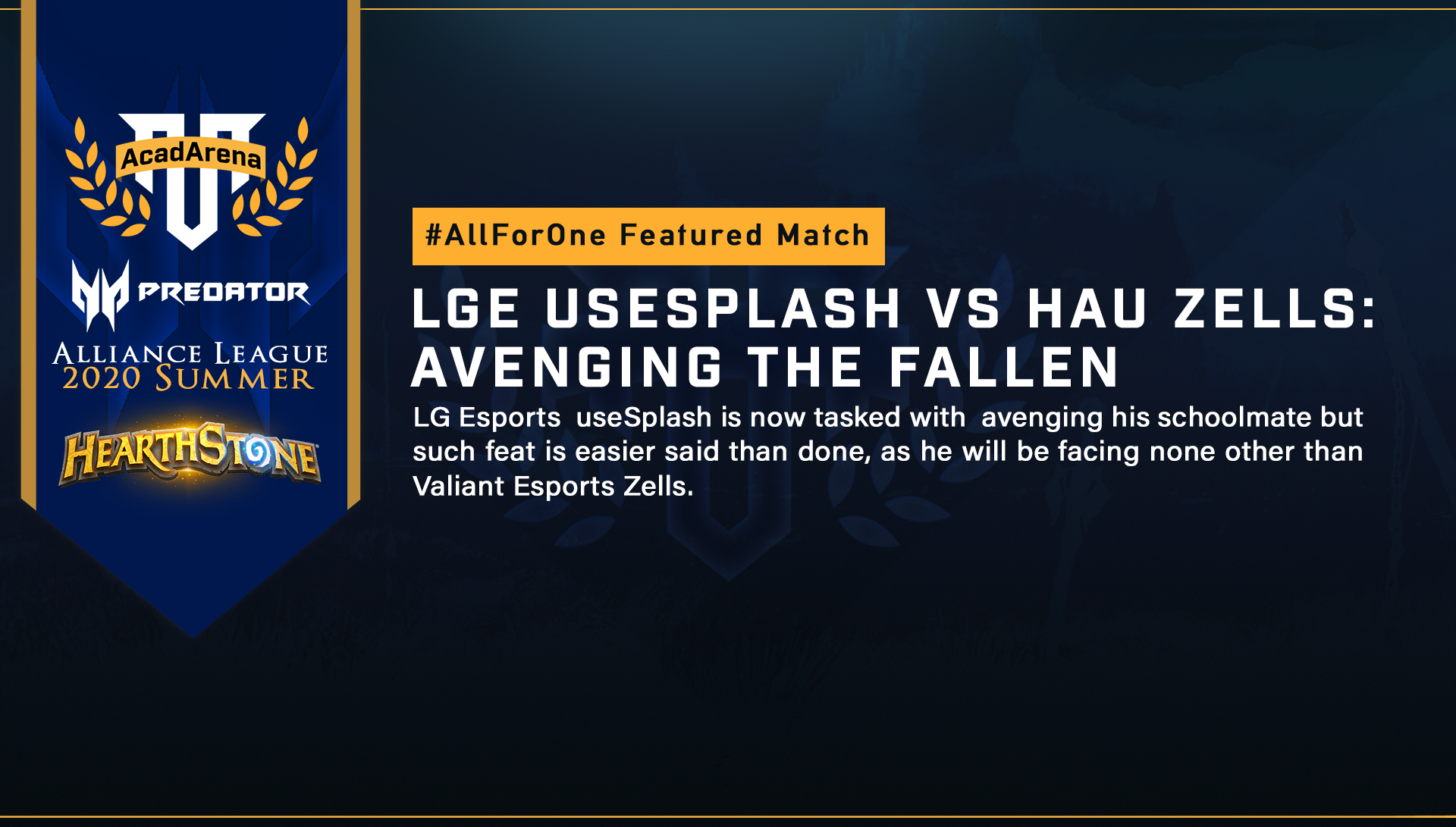 Our next series will tell a tale of vengeance.

Had Justin “Dippy” Ngkaion progressed to the semifinals, he would be playing against fellow LG Esports representative Rafael “useSplash” Evangelista. But that isn’t the case, and useSplash is now tasked with the noble deed of avenging his schoolmate.

Such a task is easier said than done, as he will be facing none other than Sian “Zells” Dela Cruz of Valiant Esports. A consistent performer in numerous Esports AcadArena Aces tournaments, Zells also dominates the Philippine Teamfight Tactics ladder.

Zells progressed through the round-of-16 with ease, beating Reinhardt “KungFuhrer” Rey of Oblation Esports 2-0. His quarterfinals series against Dippy proved to be a stickier affair but he was able to pull off an impressive reverse sweep to avoid elimination.

Usesplash’s path to the semis is nothing scoff at either, having single handedly ended the Golden Eagles’ dreams of a Hearthstone title. He swept Ivan “Aurelious” Espeja 2-0 in the first round and beat Eric “RedStattik” Delos Reyes 2-1 to get to where he is now. The mere fact that he made it this far into the tournament is a huge achievement in itself considering this is his first foray into the competitive Hearthstone scene.

It is worth noting that useSplash has an awful lot of confidence in Spell Druid even after Scholomance Academy rolled along. The unchanged list will be making its third appearance for useSplash this weekend along with Libram Paladin and Galakrond Shaman.

Zells, on the other hand, is bringing Guardian Druid, Bomb Warrior, and Miracle Rogue. We’re sure many viewers are itching to find out how a Spell Druid-Guardian Druid matchup pans out.

Libram Paladin is an extremely strong deck in the pre-legend Diamond 5 to Diamond 1 bracket but it rarely sees play in the competitive setting. Shaman has been the least popular class since Ashes of Outland and the Galakrond package useSplash opted to go with is unpopular even by Shaman standards.

Meanwhile, the only classes Bomb Warrior fears are Paladin and Hunter, and Zells can easily get rid of that problem by banning Libram Paladin. Miracle Rogue is favored against Guardian Druid and all Shaman archetypes.

Catch the Semi-Finals for the Predator AcadArena Alliance League Summer 2020 Hearthstone this Sunday, September 13, 2020 only at twitch.tv/acadarenaph