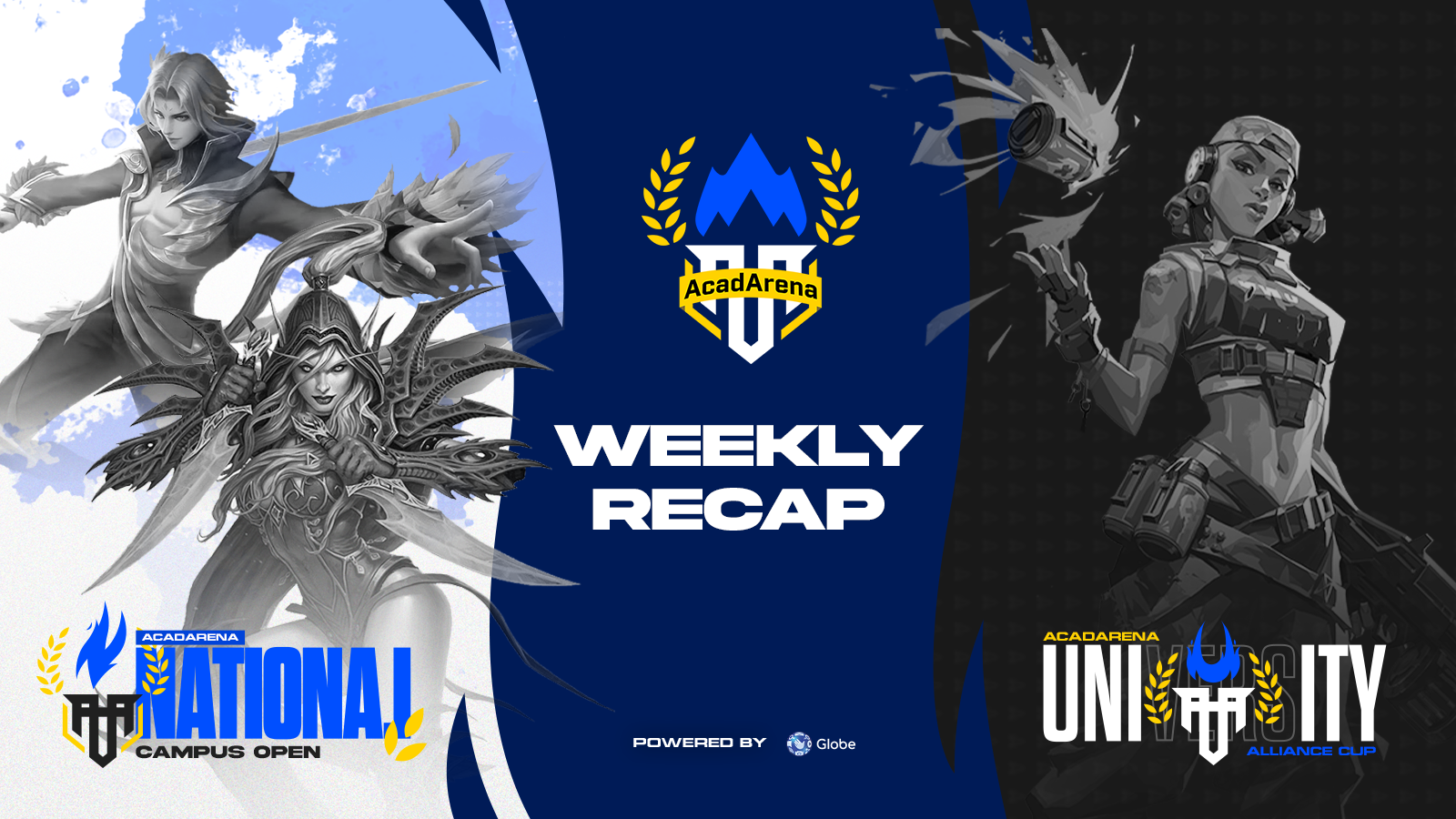 The battle to represent the country in the PVP Esports Campus Championships resumed with some playoff action in the sixth week of the AcadArena University Alliance Cup. Here’s what you missed:

The weekend kicked off with the Malayan Warlocks booking a semifinal encounter with the seeded LG Esports after sweeping the MGS Spades. The Valiant Archangels upset the iTamaraws in the second series of the day and had to go through Viridis Arcus to get a spot in the grand finals.

Sunday started pretty well for the underdogs. The Warlocks took game 1 against LG Esports but one map was all the Blue Eagles could afford to give away. The boys of Katipunan put all hands on deck to pull off an impressive reverse sweep.

The Valiant Archangels were en route to another upset after drawing first blood in their semifinals series against Viridis Arcus but the Green Archers thoroughly outclassed them in the next two games to complete a reverse sweep of their own.

Next week, the Juan brothers will settle the score on Philippine campus esports’ biggest stage. Tune in next Saturday for the grand finals of the AcadArena University Alliance Cup.

16 campus teams were in contention for local and international glory but the Bravehearts of Faith Colleges stood head and shoulders above the rest to earn the right to represent the Philippines in the PVP Esports Championship. Relive all the action from the playoffs of the National Campus Open for MLBB:

The Bravehearts were a force to be reckoned with in the regular season and that booked them a spot in the semifinals against the PLM Haribons. They were in cruise control after winning the first two matches but the Haribons began to mount a comeback halfway through the series. The boys of Faith Colleges stifled the flames in time to emerge 3-1 victors.

The Malayan Warlocks pushed Bravehearts into a deciding game 5 in the grand finals and there’s a clear reason why. They were equally impressive the entire season and stamped their place in grand finals with a clean 3-0 sweep over PUP FEWA in the semifinals.

Given how close both teams were in skill, it was no surprise that the grand finals was a back and forth affair. The Bravehearts once again stood firm to prevent their opponents from coming back into the game to take home the AcadArena National Campus Open Mobile Legends: Bang Bang title. They will be representing the Philippines in the PVP Esports Championship next month.

Last week, 28 students from all over the country heeded the Innkeeper’s call to fight for the chance to represent the Philippines in the International Esports Festival 2020 Korea. The new stars of campus Hearthstone made waves but in the end it was Alliance League champion Enrico Lim of the Teletigers who took home the crown.

Enrico lost 2-0 to Steve “Rence” Esconting of USC in the first round of Swiss, which meant every round from then on was a must-win if he wanted to keep his IEF dreams alive. Enrico did just that and finished Swiss in fourth place with a 4-1 record.

The Teletigers’ Golden Boy dispatched Michael “Mgan910” Gan of LG Esports in the quarterfinals to set up a semis encounter with the Oblation Esports’ Tyrone “Shampoo” Aguila, the only unbeaten player left in the tournament.

Enrico made quick work of Shampoo, winning the series 3-1 to book his spot in the grand final. His final boss would turn out to be Valiant’s Sian “Zells” dela Cruz, who pulled off an insane reverse sweep against Patrick “Patrick07” Domantay of Oblation Esports in the other semifinals series.

The grand final was a back and forth affair of Demon Hunter and Rogue mirrors and RNG fiestas which could’ve gone either player’s way. With a lucky Zul’drak Ritualist evolve and an unstoppable Questing Adventurer early into game 5, Enrico never looked back.

The win marks Enrico’s third consecutive collegiate title and he will have the honor of representing the Philippines in the International Esports Festival next month.