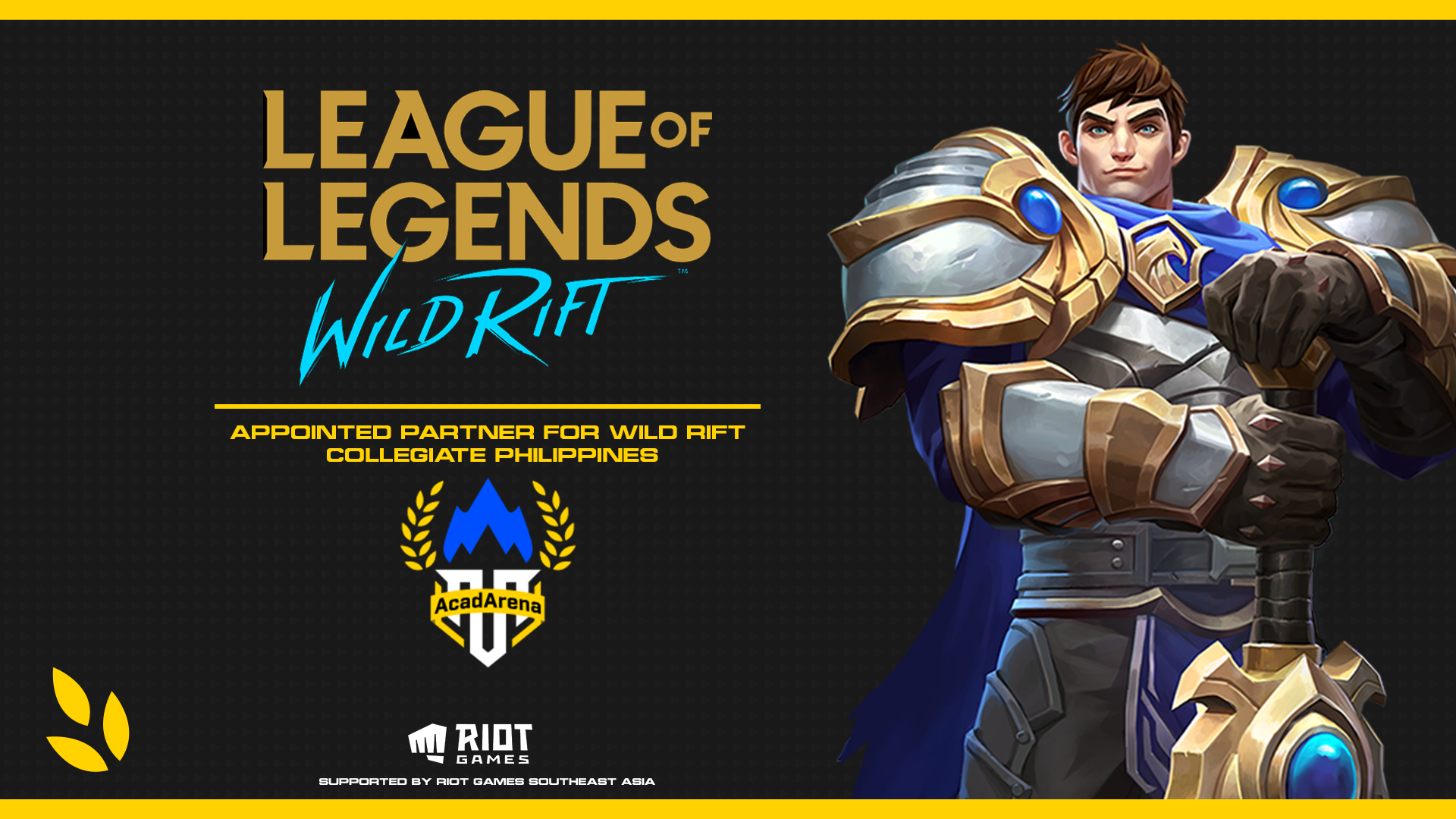 Esports AcadArena, the Philippines’ leading campus esports initiative, proudly announces that it has been named one of Riot Games Southeast Asia’s partner organizers for collegiate League of Legends: Wild Rift programs and tournaments for 2021.. As the appointed partner of collegiate tournaments for League of Legends: Wild Rift in the Philippines, AcadArena will be working closely with Riot Games Southeast Asia next year to bring official competitions to accredited colleges in the market.

Founded in 2019, AcadArena has played a major role in pioneering major organizations and milestones in the Philippine collegiate esports space, including the first esports merit scholarship in Southeast Asia. This partnership is a key moment in its plans to scale up even further in 2021.

Chris Tran, Head of Esports at Riot Games Southeast Asia, Taiwan and Hong Kong commented, “At Riot, we are committed to providing the best player experiences in every market, and we are excited to work with AcadArena to bring League of Legends: Wild Rift collegiate competitions to the Philippines. Our partnership gives college students in the Philippines an opportunity to showcase rising talent in the collegiate mobile MOBA scene, and empowers colleges to grow communities on campus and inter-collegiate competition.”

The cornerstone of AcadArena and Riot Games Southeast Asia’s partnership will be the inclusion of League of Legends: Wild Rift in the University Alliance Cup, AcadArena’s highest tier of competition for accredited partner-schools. Taking place at the end of Q1 2021, top placers out of 24 selected schools will be shortlisted for the aforementioned Globe x AcadArena Esports Merit Scholarship.

“As a partner of both AcadArena and Riot Games Southeast Asia, we couldn’t be more excited about this team-up,” said Dennis Dominguez of Globe Telecom. “Both parties will be up to great things for 2021, and we’re looking forward to continuing supporting them.”

On top of being integrated into the University Alliance Cup, League of Legends: Wild Rift will also be present in AcadArena’s weekly Aces tournaments -- which are open to any and all schools in the country. This means that the game will be present in all forms of collegiate competition, both casual and varsity-tier.

“As a community with deep roots in past Riot titles, we’re super excited to be working with them once more to develop collegiate Wild Rift programs in the region,” said AcadArena CBO Justin Banusing. “With many of our events in the past year featuring games by Riot like VALORANT and Legends of Runeterra, this partnership just makes a lot of sense.”

To participate in the University Alliance Cup and be eligible for scholarships and organizational support, schools may apply to the Alliance Program -- AcadArena’s system for accrediting campus esports programs. Learn more about AcadArena, the Alliance and what it can do for your school by visiting acadarena.com/alliance.

Riot Games was founded in 2006 to develop, publish, and support the most player-focused games in the world. In 2009, Riot released its debut title, League of Legends, to worldwide acclaim. League has gone on to be the most-played PC game in the world and a key driver of the explosive growth of esports.

As League enters its second decade, Riot continues to evolve the game while delivering new experiences to players with Teamfight Tactics, Legends of Runeterra, VALORANT, League of Legends: Wild Rift, and multiple work-in-progress titles. Riot is also building the world of Runeterra through multimedia projects across music, comic books, board games, and the upcoming animated series Arcane.

Founded by Brandon Beck and Marc Merrill, and led by CEO Nicolo Laurent, Riot is headquartered in Los Angeles, California, and has 2,500+ Rioters in 20+ offices worldwide.

AcadArena is the Philippines’ leading campus esports program, focused on developing initiatives around three pillars: community, career and competition. Founded in 2019 by industry veterans Ariane Lim and Justin Banusing alongside Globe Telecom, AcadArena engages with over 300 schools annually through its various verticals. Its Alliance program accredits the country’s best campus esports organizations, with a growing network of 50+ active universities. It is the regional partner of Twitch Student, the student program of Amazon’s Twitch streaming platform.