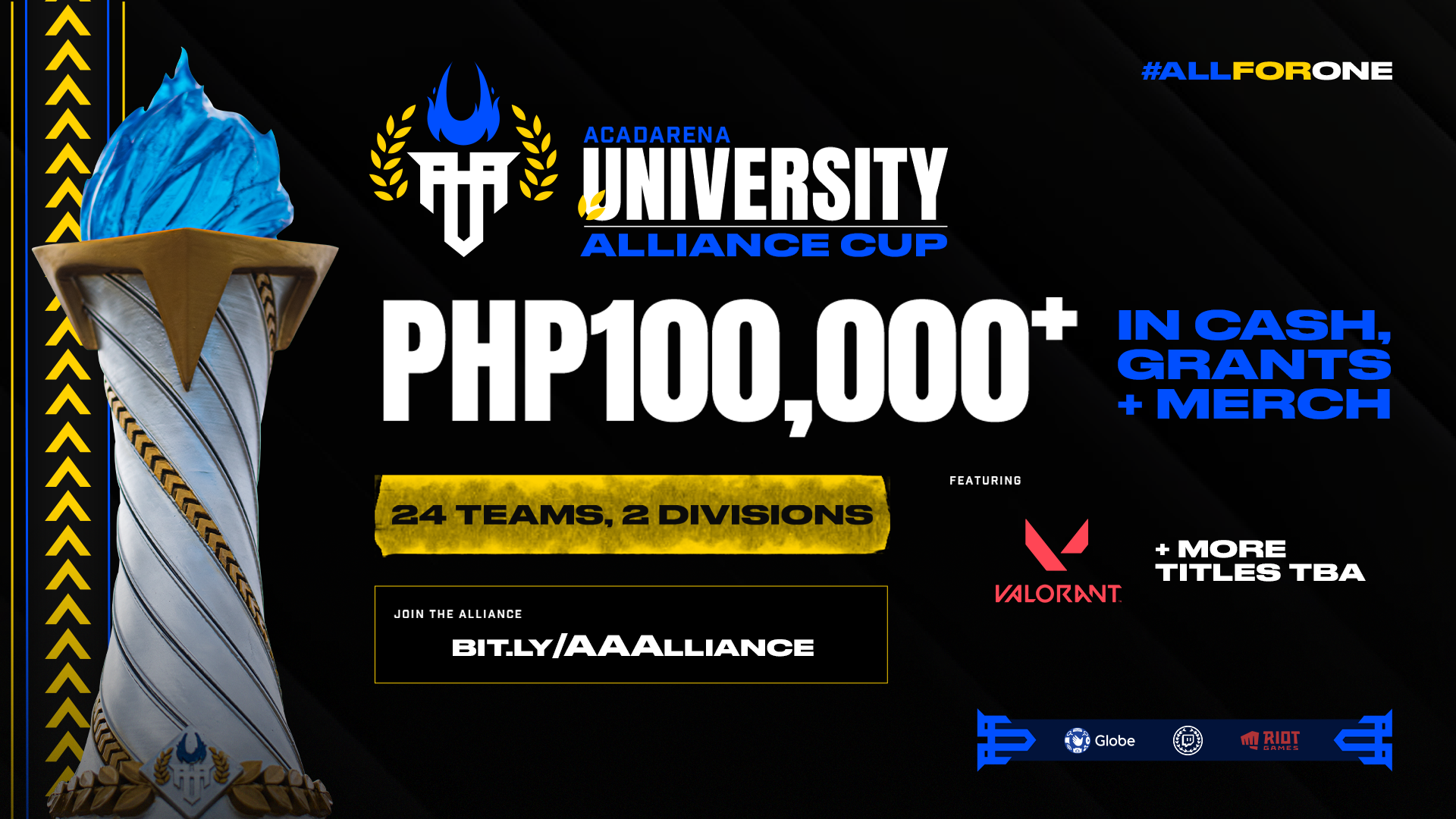 University Alliance Cup is back this year with 2 new divisions to accommodate our growing Alliance network of schools, helping them in healthily applying what they’ve learned throughout their time in our system.

Through our new format, we’re hoping to see a more competitive UAC experience!

As the Alliance grew, we knew we had to think of ways to accommodate all the new additions to the family. With over 50 student-organizations now in the Alliance compared to the 20 or so we had last year, we decided to expand the UAC to have two divisions: Premiere and Contenders.

Premiere will feature 12 selected Alliance organizations competing in a two group round robin into single elimination playoffs format similar to last year, with over PHP100,000 in cash at stake alongside special limited edition merch. Contenders on the other hand, will feature the rest of the Alliance schools duking it out in a double elimination bracket in an effort to reach Premiere. At the end of the split, the bottom 4 teams in Premiere will defend their slots against the top 4 of Contenders in another double elimination bracket.

With two divisions complimented by a relegation/promotion system, we hope to give the newer teams a better stage to transition into championship contenders. We also hope the idea of relegation motivates teams in Premiere to stay on the grind and keep improving.

Thousands in cash, merchandise, and grants

We want to motivate our Alliance organizations in doing the best they can to showcase the talents of their teams whatever division they’re in. Teams placing 1st to 4th on both divisions will enjoy a cash prize and some in-game prizes depending on placement.

For the higher seeded teams, they’ll get to bag grants to empower their organization’s efforts in pushing campus esports forward.

We’re about to get wild

If you haven’t watched our AcadArena Compete Trailer, make sure to click the hyperlink to get a clue on what’s coming for University Alliance Cup this 2021! All that we could say for now is that things are bound to get wild as we bring campus esports at the palm of your hands.

You could be part of this too

The Alliance is more than just a means to join the University Alliance Cup. Apart from exclusive leagues, we have a variety of ways to empower students into making campus esports better for their campus. From weekly events via Aces, to student event support via Etrams, and scholarships via G.A.M.E Scholarships, we cover everything a student gamer might need.